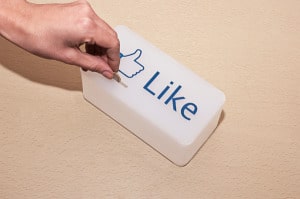 Whenever you login to Facebook, you see only a very small fraction of all the content being posted by your friends at any given time. In order to determine which items should appear within your news feed, Facebook grades all content posts according to what it thinks your level of interest with each of them is likely going to be. The mathematical formula that determines this for Facebook is known as Edgerank.

Edgerank has many factors, but today I’m concentrating on comparing the two most basic forms of interaction with a Facebook post – comments & likes.

The awesome guys at EdgeRank Checker examined a random sampling of 5,500+ Facebook Pages. They analyzed 80,000+ of their Posts over the month of October (2011). The 80,000 posts were all of the “Link” type, to keep Clicks more accurately represented in their data. Each Post was analyzed (clicks, shares, fans, etc).

They analyzed how many Clicks a Post received against each major metric (Likes, Comments, Impressions). This can give a marketer a basic guideline on how many Clicks (on average) they can expect per engagement type. For example if you’re Post received 2 Likes, the Link on average should receive approximately 6 Clicks. The overall results are as follows:

So what does this mean?

For every Like a Post gets, it received on average 3.1 Clicks. For every Comment a Post receives, it results on average 14.678 Clicks. This ultimately means that the more engagement your update receives, the more Clicks it will receive. The most interesting fact about this data is that a Comment results in roughly 4 times the amount of Clicks.

What does this mean for you?

If you look at Mashable’s Facebook posts, they always ask a question to engage their followers and encourage them to comment. More comments = more clicks.