How Starbucks Beat Samsung for Most Followed Brands 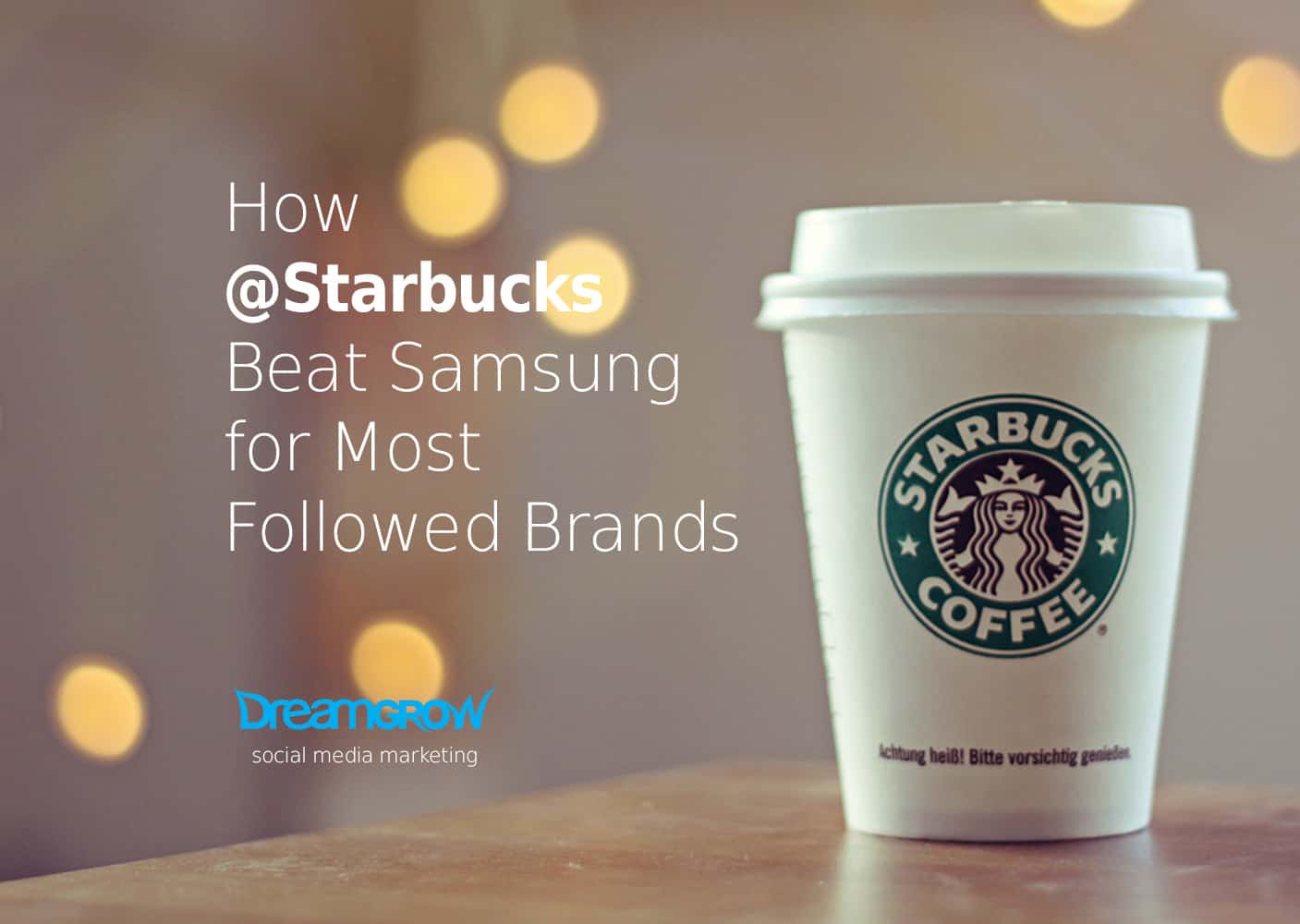 For a long time, the most followed brand account on Twitter was @SamsungMobile. They were so good at what they do I even wrote about it just a month ago! But Starbucks has overtaken them for the top spot in the US market, which I did not see coming considering that a month ago they were 1.8 million followers behind!

Starbucks have been using some solid and innovative Twitter marketing tactics to overcome Samsung and take their spot on the top. You may not have the marketing budget of Starbucks, but you can learn from them and scale their tactics to your brand.

Why Starbucks is now the most followed brand on Twitter

The best brands on Twitter know that they’re nothing without their followers. This must be especially true for a brand like Starbucks which features so frequently in the lives of their fans. Think about how often you show up at Starbucks, and how many opportunities there are for you to tweet about them. How often are you going to tweet about your new Samsung smartphone? Maybe once when you get it, and then again when it breaks.

Starbucks love retweeting their fans’ positive comments. Here are a few which they retweeted recently, building their social proof on Twitter:

@Starbucks I don't know what angels eat for breakfast, but I wouldn't be surprised if it was your new chorizo and egg sandwich

They have been focused on sharing the experiences of their followers, and it has only helped them grow their account. This may be the easiest Twitter marketing tip of all as anyone can hit the ‘retweet’ button. It doesn’t take long, and it doesn’t cost you a dime! Your followers are your greatest asset. Period.

Easy and practical to use hashtags

Creating hashtags which your followers will engage with is a challenge. User-generated content is a huge bonus for any Twitter account, and connecting it all with a hashtag is how you see true success.

Starbucks nailed it with their cute, easy to share, non-threatening #StarbucksDate hashtag. People love to snap photos of themselves with friends, and many meetings happen at Starbucks. They have received hundreds of tweets using the hashtag:

Meanwhile, Samsung has been too focused on creating hashtags for their products. Don’t make the same mistake of focusing on the products. Instead, focus on what your customers use your products for. Starbucks is used as a place for friends to meet. They’ve created a hashtag marketing campaign which focuses on their followers first, and this is why they’re winning the Twitter follower war right now.

Anyone can take the first kind of photo for easy shares as your customers relate to you.

There’s nothing stopping you from creating images like this. These are images which your audience can easily relate to as we’ve all either been the person taking the photo, or the person covering their face. It’s relatable. Following Starbucks is like following a friend. It’s why they are so trusted both on Twitter and in the real world.

Then they have those visuals which come with a big budget and a lot of talent:

These types of images are difficult to get for the average person, and that’s why they get shared. People like to look at cool stuff on Twitter, and they like for their followers to see cool stuff too. That’s where sharing happens. Having a varied Twitter content plan helps you create better tweets as variety is much better on Twitter than monotony.

They use many supporting accounts

Have questions about the changes coming to the new Starbucks Rewards program? Here’s everything you need to know: https://t.co/rGRGeMXxPj

And even accounts for their Starbucks Reward program:

This type of Twitter marketing is hard to pull off. You need many people to manage it, and it will take up lots of time. The average Twitter marketer will get by starting out with a separate account for handling support issues. This can be such a huge move as it can take negativity away from your main account and focus it somewhere that doesn’t feature that content you work so hard to create.

Your next step would be branching out to one new language. If you’re in Canada you need a French account. Those in the USA may want to add a Spanish account. In Europe? Well, where do you want to expand to next? You’re spoiled for language choices!

How Starbucks took the top spot

Your brand likely doesn’t have the marketing dollar of Starbucks. That doesn’t need to matter that much though as Twitter has done a lot to help level the playing field for brands and businesses of all sizes.

The tactics which Starbucks have used, which you can take and scale to your size includes:

Plan on incorporating these tactics into your Twitter marketing and you will see your account grow. How do I know? Because Starbucks used them and they grew to be the most followed brand on Twitter.