Home / Social Media Marketing / Top 10 Social Networking Sites by Market Share Statistics [2023]
Dreamgrow is reader-supported. When buying products through links on the site, we may earn a commission (at no extra cost to you).

Take a look at the interactive chart with more than 10 years of data. 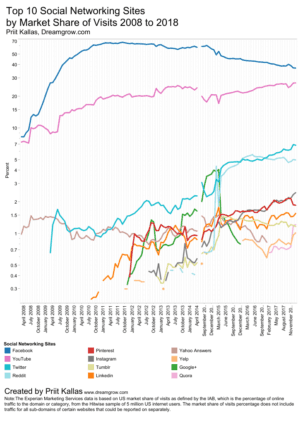 Although, Facebook monthly active user count breaks new highs globally it has lost market share for several years in US. Starting from near 70% dominance. This has dropped to 36.64%. Seems that people are diversifying their social media use. Globally Facebook reached an important milestone! 2.20 BILLION monthly active users.

Looking for more reading materials? If you're into eCommerce, you'll want to check out our Jungle Scout review here and see how you can take your store to the next level.

Twitter's market share was at a virtual standstill for the most of 2016. But starting from October 2016, there has been a growth spurt. Twitter seems to gain traction and hovers around the highest market share ever with 6.82%. Things are looking up for Twitter as they posted first-ever earnings in the first quarter of 2018. Positive news also reflects on their stock price. TWTR shares now trade around 37 dollars, considerably up from 14.3 dollars a year ago. Also since October 2016, Reddit has been in the fourth position, and Twitter has regained the number three spot in US visitor market share.

Twitter continues near its all-time high percentage on this top 10 chart with 6.82% in June 2018. Reddit's growth reversed in May 2016. It lost the third position to Twitter in November 2016; then we can expect that Twitter will remain in the third position in the coming months. Reddit had impressive growth-sprint starting below 0.7% around December 2014 and reaching 5.62% in May 2016. However, since then, Reddit has lost some ground to Twitter, and in June 2018 the gap widened to almost 2 percentage point with 5.10 percent.

In the coming months, we'll see if Reddit is running out of steam and Twitter can get ahead. As a side note, Twitter has updated its monthly active user numbers, and now the latest public number is 336 million.

Instagram has everything going for it. A pretty decent mobile app, Facebook's support, and inclusion in its ad platform. Despite all this, it has lagged behind Pinterest in US market share of visits. Pinterest relative success may be due to Instagram’s mostly mobile-only functionality. Pinterest is more like a tool than just posting pretty pictures and collecting likes. More functionality might be the reason Pinterest has kept the lead for most of the time these sites have been on the Top 10 list.

Quora gained a lot in the first half of 2018. It is now looking to replace Tumblr on the eight position. Meanwhile, Tumblr’s market share is slowly dropping around the 1.17 percent level. Quora is a perfect match for this list, but it wasn't even around when we first started publishing this list. Quora was founded in June 2009. Quora is in the seventh position with 1.29% market share of visits.

The second half of the top 10 list is always changing. Smaller social networks like Yelp and LinkedIn have been gaining market share. But they are nowhere near their all-time high numbers. The Microsoft's acquisition of Linked in for 26.2 billion dollars has not yet influenced these ratings. If Microsoft can integrate LinkedIn with its business software, then it may give the B2B social network a huge boost. On the other hand, recent history with Google+ shows that money and effort might not be enough to change the habits of users.

To put the percentages in perspective then the absolute number of visits of 1% of market share is about 32.8 million visits per week. This makes the total number of social networking visits in US 14.53 billion per month.

Every month the chart lists the top 10 sites of that time by the market share of visits in US. Please note that it is just a percentage and 30% in January 2012 is a lot less than 30% in December 2016. The gaps in the lines mean that the site wasn't in the top 10 at that time. The gap in the data from April to May 2014 is the transition period to include mobile statistics. The data became unreliable and we didn't include it in this chart. The chart is in logarithmic scale so that the smaller sites wouldn't just a single line around 1% of social network market share.

You can also check out the global view: Top 15 Most Popular Social Networking Sites and 10 Apps!

Last Updated on January 8, 2023 by Karl Both eCommerce…