Home / Social Media Marketing / 11 Awesome Facebook Campaigns to Inspire You
Dreamgrow is reader-supported. When buying products through links on the site, we may earn a commission (at no extra cost to you).

Here you'll find 11 viral campaigns on Facebook that will inspire and give you plenty of new social media campaign ideas. We also added some valuable insights that these campaigns hold. You can apply these to your businesses and see incredible returns.

For example how Bikini Luxe used employee advocacy to win on social media. Read on to discover more!

This campaign is the work of advertising giants, Ogilvy and Mathers. The campaign aimed to invoke emotion and improve the perception that people have of themselves. By using FBI sketch artists, participants had to describe their faces. Then their relatives and friends were asked to describe them. The results showed that most people were overly criticizing themselves. The campaign blew up on social media! It generated more than 630,000 shares on Facebook within its first 10 days.

Takeaway: Create a campaign that makes people arrive at insights rather than saying what you have to say outright. If Dove had simply said people are too critical of themselves instead of making people realize it, the campaign probably wouldn't have commanded the attention that it did. Even if you do state something, show don't tell.

In July 2014, Always, decided to change the meaning of the phrase “Like A Girl” and succeeded beyond expectations. Their campaign uses a video that shows the perceptions of the phrase as we got older and how it turned into a negative phrase as we got older. It became an instant success on their Facebook page and YouTube. On Facebook, the video has over 200,000 likes, and the Always page has gained almost 500,000 likes. On YouTube, the video currently has over 62 million views. The campaign touched the lives of many people and evoked strong emotions.

Takeaway: Reach people where they are sensitive and empower them. Always needed to connect with millennial girls on social media to get ahead of their competition. They took a phrase that was conventionally used as an insult and made it empowering. This takes the right mix of concept, vision and execution.

This company's Facebook page is proof that consistency is the key to successful social media management. Their Facebook page posts over 80 pieces of content per month. Frequency has paid off with their followers increasing from 4,600 in 2013 to 475,000 currently. They also engage with audience members through fun contests and challenges. One of their most popular challenges is the weekly photo challenge that asks users to send in their best pics based on that week's theme. Additionally, a lot of their content is visual – high-quality images and videos that entice and intrigue users.

Takeaway: Recognize how quickly your social feed moves and post frequently enough to appear on most of your fans feeds at least once a day. If you're not on their mind, they're less likely to think of you when making that purchase. If you cannot dish out top-notch content each day, curate it in the least. Apps like Feedly, DrumUp and Pocket are great for sourcing content and inspiration for social media.

Bikini Luxe rose to fame on social media thanks to employee advocacy. The swimwear company, founded by Candice Galek, decided to increase brand awareness by making employees brand ambassadors. As such, employees post content from the brand regularly and are rewarded based on the brand's milestones. They also have an affiliate program where they off 15% commission on the sales they refer within 30 days. All of this has seen the brand's social media following grow. They now have over 250,000 followers, most of them Facebook and Instagram.

Takeaway: Employee advocacy is brilliant for social media for three reasons: Employees have more trust than brands, friends and family influence over 90% of social users, and employees can expand your reach by as much as 100X or more. You could set up your own employee advocacy program with a good tool. Dynamic Signal, LinkedIn Elevate, DrumUp and Brand Amper have interesting solutions for employee advocacy.

Qwertee takes brand contests on social media to a whole new level. They offer one awesome t-shirt everyday by hosting daily contests on their Facebook page. Their daily posts include an image, a great caption and the basic rules of the contests. The daily activity builds up the hype, and each image they share has hundreds of likes, comments, and shares – a great way to improve brand awareness on social media. The contest's rules usually require fans to like, share and comment to increase their chances of winning. 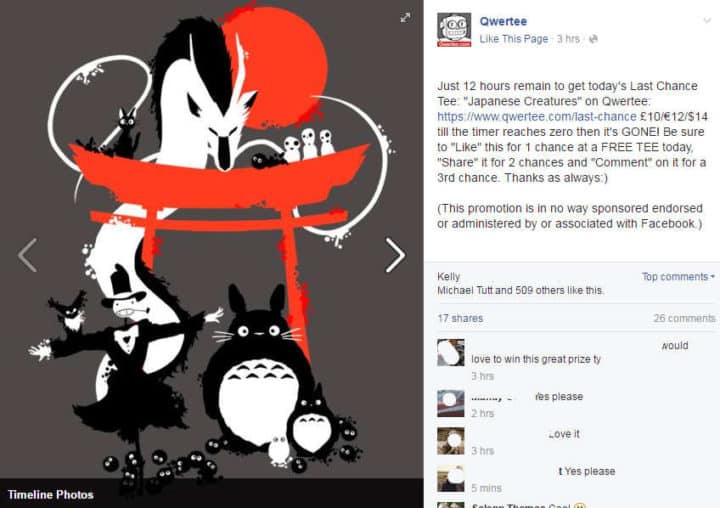 Takeaway: Create contests around your product. See how you can direct audiences focus towards the product without appearing to toot your trumpet. Giving away awesome merchandise is one way to do this, but you have to brand and execute the contest. You could turn it into an everyday affair like Qwertee if your product supports it.

Disney Parks and Make A Wish Foundation extended their long-standing partnership by starting the #ShareYourEars campaign. The campaign had simple rules – for every picture on Facebook, Twitter or Instagram that had Mickey Mouse ears and the hashtag, Disney would donate $5 to the Make a Wish Foundation. The hashtag blew up over the coming days, and Disney ended up donating $2 million to the foundation even though they had previously stated that they wouldn’t be going over $1 million. The huge donation was the perfect way to raise brand awareness, improve brand image and customer perception. 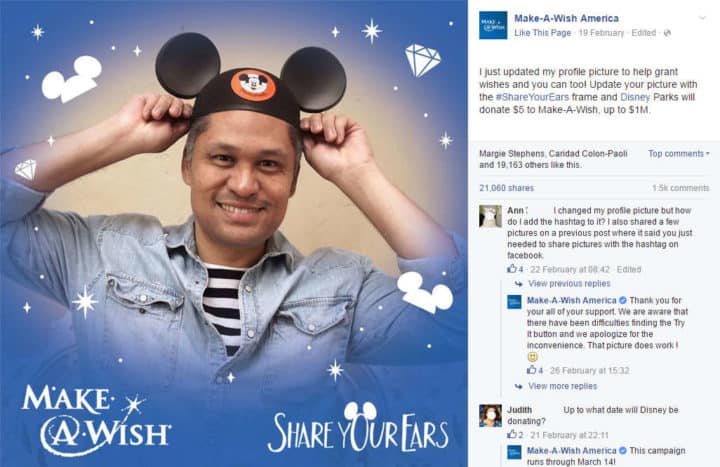 Takeaway: Sometimes, it doesn't have to be all about your brand. It could be about your empowering your audience to drive change where it matters (to them). If you're feeling generous and want to do something with your audience's participation, you could create a campaign just like this one. Don't forget; everyone wins (you also earn your social media visibility).

A campaign started by footwear brand, TOMS, in 2015. The campaign urged people to go barefoot for a day and post a barefoot picture on Instagram and Facebook with the #withoutshoes hashtag. For every post that had the hashtag, the brand would donate a pair to children in need from around the world. Although the campaign took off on Instagram, it first gained traction on Facebook where celebrities like Bella Thorne, Chelsea Handler and many more publicizing the event on Facebook. The campaign earned the brand a lot of goodwill, and they currently have over 3.6 million likes on Facebook. 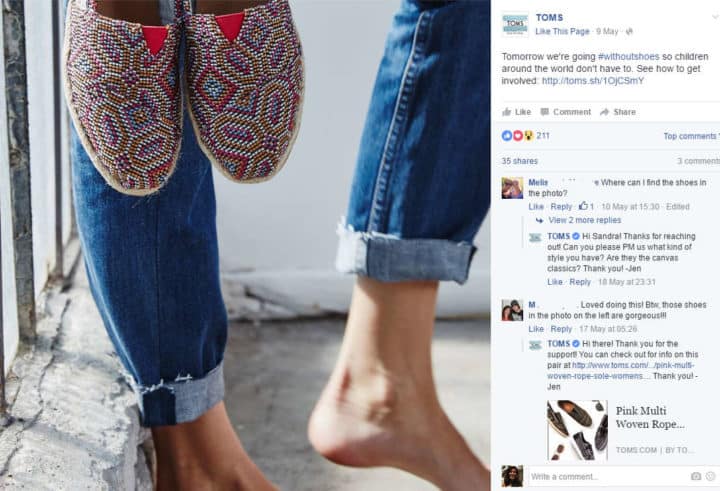 Takeaway: Making people think is one of the best things you could do a brand to connect with them. If you could move them while doing, it is even better. Not only are you creating awareness about something important, but you're also connecting with your audience while doing that, and earning extended reach for your brand and products.

Under Armour and Under Armour Women came up with this hashtag to motivate female athletes to achieve their dreams. The phrase, I Will What I Want, was meant to empower athletes to not wait for permission or approval and go after what they want. The campaign took off on Facebook when supermodel Gisele Bundchen shared her own image with the hashtag and got over 80,000 likes. Since then, numerous athletes, both past, and present have used the hashtag to show their power. The hashtag not only empowered women all over the world but it also served as great promotion for Under Armour’s newest range of products. 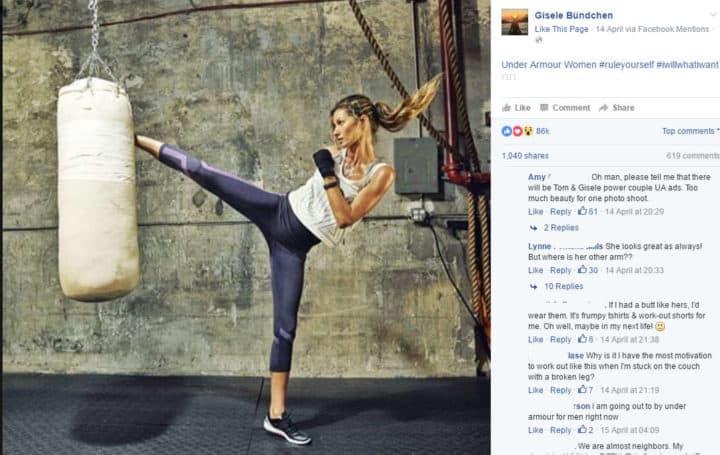 Takeaway: Inspire your audience to do something. Give them that push to go beyond where they're at and to overcome obstacles that might be keeping them from success. They'll thank you for it. Requirements: A catchy hashtag and something your audience is super passionate about.

This phrase was first used in 2013 by the Human Rights Campaign to show their support for gay rights in the US. The group asked Facebook users to turn their profile pictures red and show solidarity with those seeking equal rights. The result was a viral campaign with over 45,000 shares and 13,000 likes on Facebook within days. In 2015, when marriage equality was a topic for all 50 states, the HRC asked users to turn their pictures red again, and this time, they expanded their reach to Twitter and Instagram as well. The red profile picture became synonymous with the fight for marriage equality through this movement. 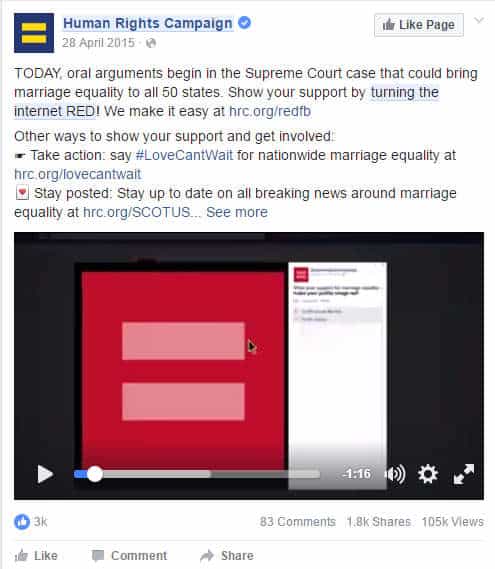 Takeaway: When you're asking people to participate in a campaign, make sure that what you ask them to do is doable. Easy to do, but different and easy to share or display on social media. This campaign asked people to turn their profile pictures red – something that other people would notice, something that would incite intrigue. Identify an action like that with the potential to generate a viral campaign, and you have yourself an excellent campaign idea.

EBags is a bag manufacturer and seller that realized that a majority of their customers were frequent travelers. To capitalize on this, the brand came up with #TravelTipTuesday – a simple and efficient way to provide great insights for their viewers. The hashtag keeps users coming back for more unique tips. To add to this, the brand regularly posts travel tips and articles that give travelers some great advice. They have over 200,000 followers just on Facebook, thanks to their great content. 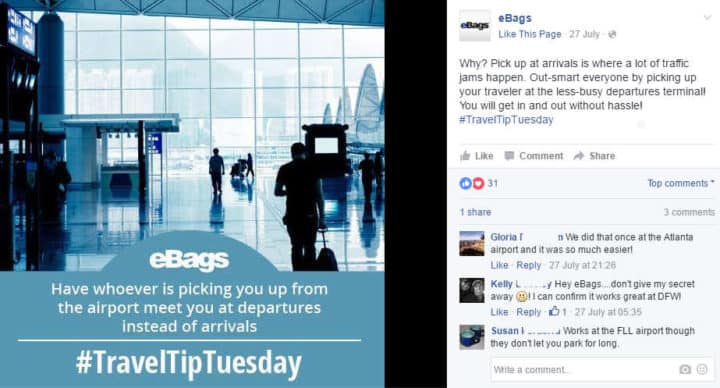 Takeaway: Every brand needs signature hashtags that can draw large audiences back to it on a regular basis. Creating a hashtag is tricky. To make it discoverable it has to be similar to other popular hashtags, and it has got to be catchy enough to be picked up and ricocheted around social media. You could create and test drive hashtags on social media groups and track its performance before launching a campaign. Hashtagify.me has useful analytics and hashtag tracking.

To celebrate an anniversary Kenneth Cole created a hashtag and Facebook contest encouraging fans to share pictures related to the hashtag. The hashtag was meant to reverberate the brand's bold style and spirit. The resulting photos even went into a fancy social hub and earned the brand valuable social capital in terms of content and exposure. 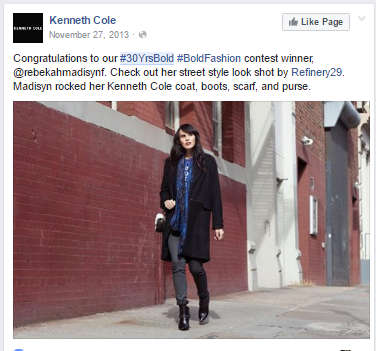 Takeaway: Create a contest that will bring you content. Content that you can share for traction on social media, and content that will drive shares in itself. Participants of this contest are sure to have shared their photographs on their Facebook walls with the brand's hashtag and identity. Extensive exposure and social impact.

Now over to you

What are the most creative campaigns you have seen on Facebook. Or even better what are your best campaigns and what results have you got? Let us know in the comments.

Send this post to your friend on:
1256
SHARES
FacebookTwitterLinkedinWhatsapp
DiggMail
Turn content into leads & sales! content marketing that converts tips and tricks cases and examples Sign up and get the latest information Your name Your emailJOIN>

Related Article
A Beginners Guide to Pinterest [Free PDF Guide]
How Much Time Should I Spend on Social Media Marketing?