How to Run an Effective Facebook Sweepstakes Campaign [CASE STUDY] 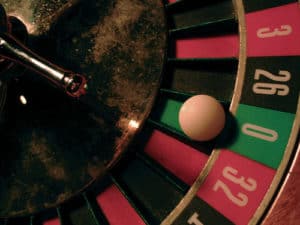 Nõo Lihatööstus, a local brand which sells retail high quality meat products for consumers, had no presence in Facebook or a strategy about how-to get started on Facebook. All they had an inactive Facebook fan page with 31 fans and you could say that they were lightyears away from their true potential. However, a lot of their target audience (consumers) are actually using Facebook, so we decided that we needed to go where the target audience was at.

We established with Nõo Lihatööstus that the status quo was to be changed and that we needed start our social media marketing activities on Facebook. The first step was to generate a critical mass of fans who are consistent with the brand’s target audience. 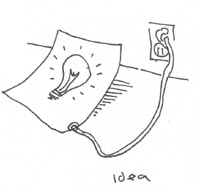 We made a Facebook sweepstakes competition where users could participate and win several prizes. A good old Facebook campaign. We already knew that about 58% people like a brand on Facebook to be part of special promotions, win prizes etc. All of the prizes were actual product gift baskets given out to several lucky winners. The total prize pool amount was just $400 USD which by today’s standards isn’t a lot to go by. To participate, users had to become fans of the page and click on the participate button (1 point). After that was done, our algorithm selected lucky winners based on random chance and likelihood.

Users could increase their chances of winning by (1) entering their email address which increased their chances of winning by 5 points and (2) share the message on their wall. In principle, sharing could have given participants an insane amount of points and this was the situation that we knowingly wanted to create. For each person who came from the participant’s shared link and registered in the sweepstakes, the original participant gained one extra point. We decided to display the users how many points they currently have and in retrospect we think it worked really well. At least judging by the results (read below for the Facebook Sweepstakes campaign results). The share feature was one of our core advertising mediums. We also ran Facebook ads for people in our target audience. These had average Click-Through-Rates which honestly could have been better. 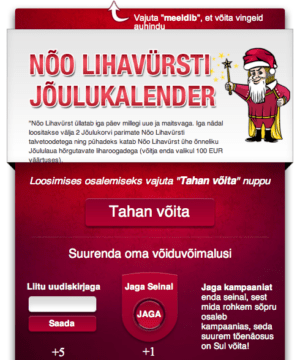 The campaign took place in December, a peak period where people consume a lot of meat products. The campaign lasted for 24 days. We decided that it would be best to make the campaign integrated with what was happening in real life (Christmas period). This is why we made our application feature an advent calendar (starting from December 1st) where each day a new calendar window would open. Inside that window was a picture of the brand’s featured Christmas products such as meat stakes, Christmas sausages, etc. By clicking on that window, a pop-up opened up with a bigger product visual that also gave detailed information about the selected product.

Also, during the campaign we tried to create meaningful content such as Christmas recipes. Also, we asked our fans questions – for example – “What kind of Christmas sausage is your favorite?” More than 10% of the fans at that time answered.

What was probably the most surprising, was the fact that most of the participants came from viral growth (from shared links that we tracked). Our analysis showed that people were really motivated by the fact that the more people they invited, the better were their chances of winning. Out of all the participants, 62.33% came from user generated shares (see the graph below). For example, a lot of participants had over 25 points which meant they had successfully invited more than 19 individuals.

Of course, we realize that Facebook sweepstakes competitions are just the tip of the iceberg. The next step (which has already begun) is to develop and implement a long term Social Media marketing and communication strategy. That being said, it’s more than likely that we will be hosting similar sweepstakes contests in the near future.

Facebook sweepstakes as a campaign model work. Most of the time at least. This doesn’t mean that all of the sweepstakes competitions will be successful, here are some reasons for typical failures:

Hi there! I'm a young marketing enthusiast currently getting my bachelors degree in the awesome field that is marketing. I'm passionate about inbound marketing, social media, mobile marketing and my own personal hobbies such as football and volleyball.