Yep! That’s right. By the end of 2012 there will be more than a billion people using Facebook.

A year ago I wrote about the countries that are big enough to matter but have not been taken over by Facebook yet. Then in February 2011 just 4 months later Facebook had grown 71%. And now you can see that Facebook has grown more than 196 percent in just one year in these countries. 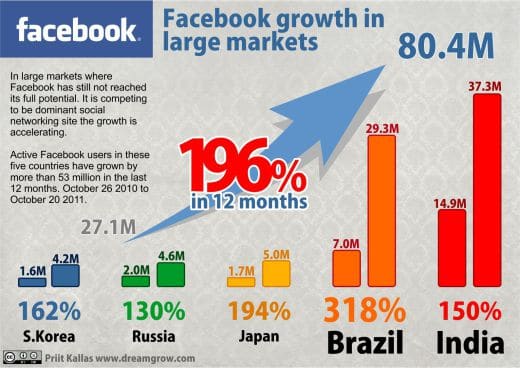 A year ago in India Facebook had just passed Orkut as the dominant social networking site. Facebook had 14.8 million users. In February I made a prediction that by the end of the year India will have 35 million Facebook users. Well, there’s still few months to go but India’s Facebook population has ballooned to 37.37 million. With 46.15% of online population already using Facebook I predict that India will reach about 45 million users and then the growth will slow down.

The kingdom of Orkut. But not for long, some time in the first quarter of 2012 Facebook is going to overtake Orkut in its last stronghold. In February I wrote that I believe that Orkut is enjoying its last year as the biggest social network in Brazil and Facebook has grown 119% since then (just 8 months) to 29.3 million users. But that is only the beginning as Facebook’s penetration in online population is only 14.57%. Facebook will see 100 million users in Brazil.

In February there was 4.2 million Facebook users in Russia. Now it’s 4.6 million. This slow adoption rate is caused by Vkontakte.ru and odnoklassniki.ru that are the major competing social networking sites in Russia. It is hard to tell how fast Facebook will grow but in the end network effect should push it to the top even there. Read more about Social Media in Russia.

Japan has more than tripled its Facebook user base in 12 months from 1.65 million to 5 million users. The rate of growth seems to be accelerating. My estimate was that 4 million users will be reached some time before 2011 is over. Well, I was right! Penetration in online population is still low with 5.08% using Facebook and this means that Facebook has a potential of 40 to 50 million users there.

Same as Russia Facebook’s growth is stalling in South Korea. The user count in February was 4 million and now it’s 4,2 million. However, there was 1.6 million Facebook users in the end of October 2010, so compared tho the year ago it’s still up more than 160 percent. I don’t know South Korea’s social networking market well enough to understand the competition. My guess is still that Facebook will just need some more time to make network effect work its magic for them.

Closed! Do not enter! China is still blocking Facebook. I’m sure that Facebook will do all it can to get that ban removed. Until then there’s nothing to report. When social, economical and political pressure open China for Facebook then they will stand no chance against Facebook domination.

Now, where did the more than 1 billion Facebook users came from? I took the countries that have more than 20 million people and Facebook penetration below 20% and extrapolated that at the current growth rates to the end of next year. Then added the potential growth of other countries and arrived at a cool billion or 1.1 billion even. And that does not include China.