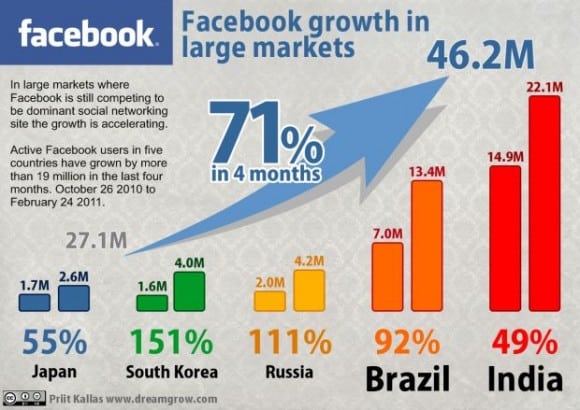 Four months ago I wrote about the countries that are not yet dominated by the social networking giant. These were Brazil, Russia, India, China, and Japan. One I didn’t mention is South Korea. In that post I made some predictions and now is the time to prove me conservative.

Four months ago in India Facebook had just passed Orkut as the dominant social networking site. Facebook had 14,852,060 users. I made a prediction that within a year Facebook will have 27 million users in India. Guess what, just four months later there’s already 22,057,280 Facebook users in India and penetration in online population is 27.23%. 35 million user by years end seems possibel

There was a bit less than 2 million Facebook users four months ago now the number is 4,211,720 and the penetration in online population is reaching a tipping point with 7.05%. Read more about Social Media in Russia.

1.65 million people used the global social networking site four months ago. Now it’s 2,553,660. Still a long way to go but the growth rate is pretty impressive. My estimate was 3 to 4 million. 3 million should be reached by May and 4 million some time before 2011 is over. Penetration in online population is still low with 2.58% using Facebook.

Somehow I missed the South Korea last time. The story seems to develop similarly to other markets. There was about 1.6 million Facebook users in the end of October 2010. Now the active user count has more than doubled to 4,010,980 and the penetration in online population is 10.17%

The force of network effect is powering the growth of Facebook. At the moment the only thing that can hold it back is the government of China. However the same network effect might influence the policymakers to do away with the restrictions. In this light the 50 billion dollar valuation Facebook got from last financing round seems cheap.