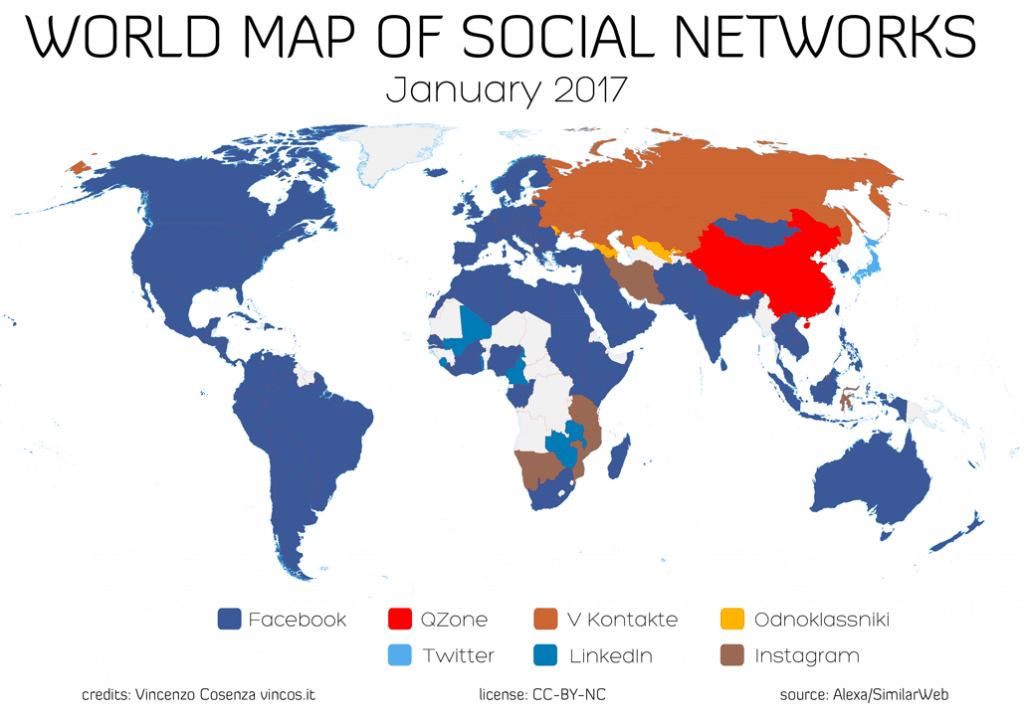 Dreamgrow is reader-supported. When buying products through links on the site, we may earn a commission (at no extra cost to you).

Italian writer, blogger, and photographer Vincenzo Cosenza has put together a visualization showing the most popular social networks around the world. The world map of social networks 2018 uses the latest traffic data from 2018.

Facebook continues its unrelenting domination. Last year there where parts of Africa and Asia where Facebook didn’t dominate. It is dominating most of the West, together with Africa, Middle-East, and the Pacific region. With a user base of 2.2 billion and growing, the social media world map will probably look even bluer next year.

Notably, Facebook has now also swallowed up Japan. The remaining pockets of resistance are Russia and China.

Although Facebook is also growing in Russia, it is still dominated by VKontakte (VK) and Odnoklassniki in the second spot. I don't see this situation changing anytime soon either. They both support the Russian alphabet and target the Russian-speaking community. They are also widely used among Russian inhabitants in other Eastern European countries.

Twitter is now second in Japan, with it's main “advantage” being the possibility to stay totally anonymous. The people in Japan like generally to stay anonymous when surfing. Facebook's privacy settings haven't really been embraced there until now.

China's QZone, when only usernames are concerned, is the biggest social network in Asia. QZone today has over 563 million users. Without a doubt, QZone is the biggest player in China and will probably stay that way for a long time because Facebook is banned in China.

You can find exact numbers in this post:
Top 15 Most Popular Social Networking Sites and Apps

There are also a bunch of smaller players, being dominant in only one or two countries. But Facebook is changing that situation quite fast: 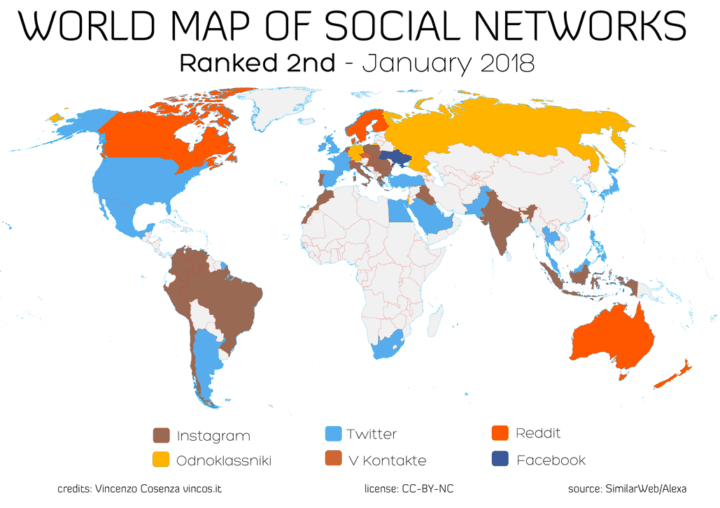 So, China aside, Facebook is still growing. By the same time next year, we will probably see a world map of social networks where Facebook is dominating most of the western hemisphere, together with the Middle-East and the Pacific. The only real players who are stopping Facebook from having a total “world dominance,” will probably be China's QZone and V Kontakte in Russia. 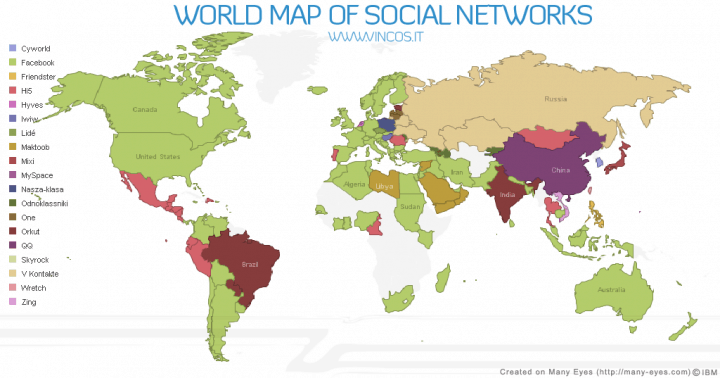 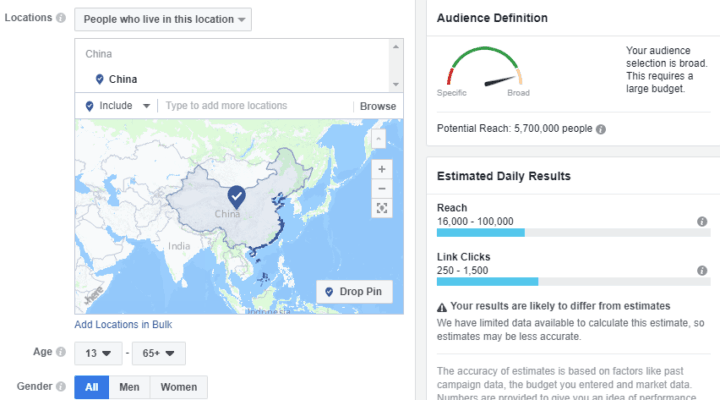 Facebook is banned in China since 2009. There are no signs that China would lift the ban anytime soon. While more than 2 billion people are using Facebook globally, there are another billion internet users simply cut off from it. Amazingly, there’s life without Facebook.

Still, in a country with more than billion people, some are ingenious enough to get past the Great Firewall of China. There are 5.7 million active monthly Facebook users in China. The current number is higher than 4.6 million in November 2017. 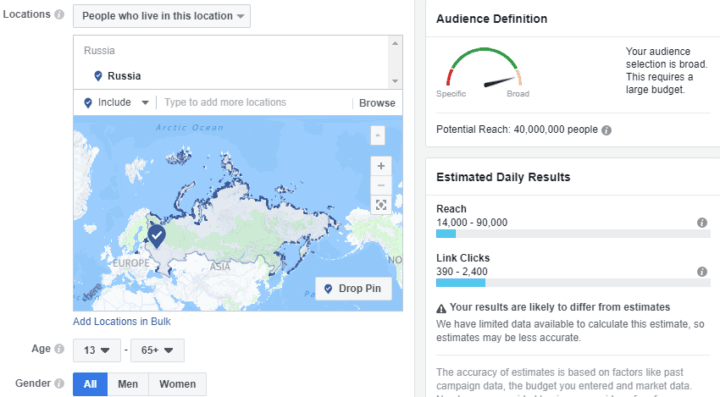 Russia has two local rivaling social networking sites, Vkontakte.ru (VK) and Odnoklassniki.ru (OK). Vkontakte (in contact) claims to have 97 million monthly active users on its homepage. VK is a Facebook clone, and its dominance seems to be strengthened by the inward-looking political atmosphere in the country.

But Facebook is not missing from Russia. It’s legal, and 40 million people use Facebook every month in Russia. This is a huge 60% jump from 25 million in June 2017. 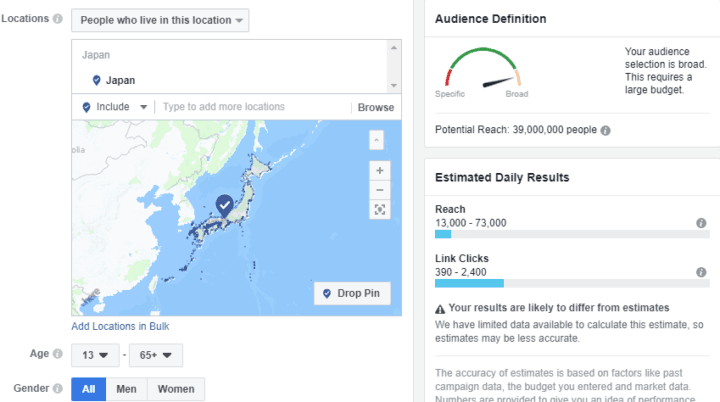 Japan was the stronghold of Twitter. The only large group of people using predominantly Twitter. However, Facebook has now passed Twitter. Numbers in the Facebook Ad tool suggest 39 million active users in Japan. That is more than 10% up from 33 million in June 2017.

While it may take some time, Facebook will topple VK in Russia. But… Russia and China are dependent on a political decision. After that, the world map of social networks would be all blue.

Being on more than one social networking site is too time-consuming for most people. This means that as we get more connected globally, one site would emerge that dominates social networking worldwide. Right now it seems that this site will be Facebook. [I wrote this paragraph in 2009].

It is hard to say if there will be one global social networking company or a social networking infrastructure that will be managed by many competing companies. Economically there would be no point in breaking up the one dominant network. Politically, however, there's a lot of people (organizations, nations) who wouldn’t want this much power and information concentrated in a single company.

In the end, the monopolistic telephone companies were broken into smaller competing firms. So, what do you think will happen with 3 billion user Facebook?

Hey, looking for the best Instagram tools for growing fast?…